The Colossally Macabre Rock Formation Kiff was touring one day, and in a smallish mid-western town they were booked into a particularly crappy hotel.

The bass player, quite to the disgruntlement of the rest, was in a very playful mood and he stomped, giggling maniacally, from room to room on his plateau boots, opening all the taps he could find just to annoy his colleagues.

It turned out that the plumbing was badly clogged: in all the sinks, the bath-tub and the toilet alike, the water didn’t drain.

This made the Foul Fiends even more disgruntled – but contrary to what one would expect, this was in fact appreciated by his spine-chilling associates (a moment’s rational thought will clarify this: after all, they were all inclined by nature – and legally obliged – to maintain a wretched, spiteful and unnerving disposition. So it is only natural that anything that helped them achieving this was considered to be helpful).

(of course, it’s far, far more complex in reality, because this simpleton explanation doesn’t take the nonlinearity into account that comes with these inverted negative feedback phenomena. For now, just consider that, to our Shocking Squad, “helpful” is in and by itself considered slightly vexing, even though it essentially furthers their goals. And that vexing-ness in turn is again experienced as pleasant, which the Monomaniacal Fright Generators are not too comfortable with. Which – but let me stop here; I’m sure that this covers the general idea. Those of you who are familiar with the term “electroweak renormalisation” will understand)

They leered menacingly to one another for several minutes, while water from the overflowing tubs and sinks spread out over the carpet. Eventually, the lead-guitarist – the one with the extended tongue – squish-flap-sopped over to the telephone and rang up the reception desk: “Lhey oo! Uh whainin ih lohhehd! Ehn’ ah hehlelihian uh, hillyah? Hah eh ih ehhi!”

He stood listening to the receiver and frowned, but then the bass player got up and patiently took the phone out of his hand, put it to his ear and said: “Hello? Yes, sorry about that… yes …” he glanced at the guitar player … “I’d say, about a foot long. No, it’s on purpose … yes … well, anyhow, what he was trying to say was: ‘Hey, you! The draining’s clogged! Send an electrician up willya? And make it snappy!’ Oh, hang on a second …” he paused to look at his dire comrades-in-horror, who were frantically waving a notepad with the word PLUMBER written on it – of course using a menacing-looking Gothic font.

“Wait! No, make that a PLUMBER! A snappy plumber, that’s right!”

He put down the receiver and giggled.

A minute past, while they listened to the gurgling and dripping of water.

Then there came a polite knock on the door.
“GASP!!”, the Nightmarish Foursome uttered in unison.

Slowly, the door creaked open to reveal the hulking outline of an space-man dressed in a Moon-suit. He carried a suitcase.

“Are you the plumber?” the bass player suggested, without much hope.

It sounded muffled from inside the space-suit.

“[BEEP] But that’s not what I’m here for: [BEEP] I flew all the way to this One-Horse Nothing Gulch [BEEP] in my modified LM CHCHT [BEEP] copy that, Houston [BEEP] CHCHCHT in order to have my Hark Cloggo albums signed by y’all [BEEP]”.

He held out the arm holding the suitcase. He put it down and it opened to reveal a couple of vinyl LP records by, indeed, “Hark Cloggo & the Clodboys”.

They were all there: “The Rake’s Progress”, “Diggin’ a Dunkin’ Pond”, “The Clodboys Live a-diggin’ in Butchart Gardens”, “Growing Hedgehogs Upside Down”, “Listless Lawns & Pretty Petunias” – the whole shebang and their uncle.

He assumed a pose as if he was holding a rake, and started to sing:

As he sang with the muffled, tinny radio voice emanating from the bulky suit, he moved his arms in rhythm as if he was raking to the song:

As he moved, now imitating a person digging and shovelling earth, or, as far as was possible in the EVA suit, the hotel room lights reflected ironically in the glass front of his helmet.

The Petrifying Double-Duo was watching all this with ever-mounting amazement. Their mouths slowly fell open – they even forgot to gasp.

The space-man stopped dancing and singing, and they couldn’t see his face because of the reflecting helmet. But his posture did reveal a mounting sense of uneasiness:

“[BEEP] Eh, what’s the problem guys – never seen an astronaut having a good time before? [BEEP]”

“Why, yes”, the bass player said after some deep thought, “several times, now you mention it. But surely not while we were expecting a plumber.”

“[BEEP] By the way …. [BEEP]”, he pointed at the still running tap above the copiously overflowing sink, “[BEEP] why don’t you guys close the faucets? [BEEP]”

“Because”, the bass player explained slowly and patiently, as if talking to young child, “… because it’s the clogged plumbing that’s the problem … the faucets are OK, as you can see.” He pointed to the expanding water puddles on the soaked carpet.

By the way he didn’t move at all, the space-man managed to project a strong impression of utter bewilderment.

In the ensuing silence, the Barbarous Horrorrockers exchanged some whispered grunts and sibilants among themselves, after which they got up, grabbed their Scary Ballpoint Pens and proceeded to sign the space-man’s albums with the unreadable sharp, pointy barbs that their recording contracts specified.

This released the astronaut from his bewildered state. He straightened his back, and his voice sounded positively pleased as he remarked:

“[BEEP] Hey, thanks! I really appreciate it. By the way, nice new outfits you got there … [BEEP] …. it’s sure quite a change from the dungarees and straw hats that’s ever been yer trademark! [BEEP]”

He took the suitcase with the signed oeuvre from the bass player and hesitated for a few seconds, as if looking for the right words to say to the Four Hamlets of Grimness, who had assumed their traditional theatrical PR-pose, arms akimbo.

But then the door suddenly burst open to produce a voluptuous lady, her hair tied together in a tail that seemed to sprout from the top of her head like a fountain, dressed in leopard-print leggings and a frayed and moth-eaten fur body warmer. She was holding an umbrella in a way that suggested that she was going to use it to bring her point of view across.

“So, what are you clowns try – ” she cut off in mid-sentence as she beheld the Infamously Brain-freezing Megastars. Her mouth fell open, and the umbrella from her grip.

The spaceman, being a gentle and empathic soul, sensed that this was a good moment to leave. He turned around and walked out the door.

The sound died away as the spaceman carefully negotiated the staircase.

Meanwhile, the Emperors of Fear and the leopard-printed lady hadn’t moved. Experience had taught the Fearsome Foursome that it generally worked out best in these situations to wait and see how the situation would develop, but this lady fan here showed no sign of emerging from her Catatonia Idolatrifica (a temporary state of catatonic shock, found to occur in susceptible individuals when confronted unprepared with an overdose of the subject of their idolatry) any time soon.

Some minutes passed while the water puddles on the floor merged into one, accompanied by the splashing and dripping of flowing water and the gurgle of running taps.

Then there sounded a fizzle, a bang! and all the lights went out.

“Damn and blast! The water must have short-circuited the gas”, the bass player remarked, approvingly.

After another couple of minutes, they saw a flashlight beam playing through the open door.

“Hello? Anyone in there?”

A figure in a yellow rain-suit emerged. He played the beam of his flashlight over the scene.

“Hey! You’re all just standing there like that? In the dark? And Mrs. Young, what are you doing here?”

Then he noticed all the running taps. He cursed and ran from tap to tap, closing them.

Meanwhile, yet another figure appeared in the door opening, wearing an overall of indeterminable colour and carrying a traditional blue steel plumber’s toolbox.

This finally triggered the Fourfold Megalith of Doom Rock to move again. The bass player eagerly walked towards him, his hand extended.

“Why, no. I’m Fritz the Flippin’ Music Video Producer, and I got tipped by NASA that there should be a once-in-a-lifetime chance here of filming a blast of a Hark Cloggo music video that could leave MTV gasping for credits in the gutters!”

“But…” the bass player pointed at the plumber’s toolbox.

“Oh, that … yeah, never mind that, I’m afraid I’m a bit of an overly fanatical amateur plumber … I take my stuff everywhere. You never know where you might come across a clogged drain, especially in these parts, it seems.”

He surveyed the soggy floor with a critical glance. “Now you mention it, maybe I should have a peek later on. But, let’s do business first, shall we?”

He put two fingers in his mouth and whistled. Immediately, there was stumbling in the hotel staircase and people carrying spotlights, camera equipment and guitar amplifiers burst into the room.

Alarmed by the sudden increase in activity, the man in the yellow rain gear emerged from the bathroom. Fritz the producer quickly cornered him, and after a brief hushed conversation he slipped him a few notes. The man disappeared without comment.

Props boys carrying garden gnomes and gardening tools entered, and an improvised stage resembling a garden gazebo was erected with an intimidating drum kit in the center. Diesel generators were started, bright spotlights flashed on and were aimed at the stage.

A fierce-looking lady with a clipboard and Buddy-Holly-glasses shoo’d the Angst-projecting Squad on stage, and they were offered black and purple guitars with many non-functional but menacing-looking points and razor-sharp edges.

Camera’s clicked on tripods, cables with overbearingly-professional-looking connectors were attached, microphones dangled from long sticks, connections were made and “one-two-three-testing-testing” –tested by crawling technicians.

Within five minutes, the setup was done.

Fritz, now with a director’s cap on his head and holding a megaphone, surveyed the scene. His eye fell on the leopard-printed lady, who was still standing on the same spot, mouth ajar.

“Can somebody put her in front of the band?” he croaked in the megaphone.

A girl with a trolley ran up to her.

“And where are those gardening tools? Ah ….” he nodded approvingly while a spade was stuck in a pile of earth, and someone quickly unrolled a garden hose.

Sound technicians tweaked the overdrive controls on the guitar amps.

The proceedings had taken the Savagely Wretched Underbelly-addressing musicians by surprise and, for maybe the first time ever, they didn’t quite know what to do.

The drummer hand-signalled something like “just a second” to Fritz, and the four clattered their heads together.

“But you know what it says in da contract, don’t ya? ‘Rule three: Thou Shalt Grab Any Opportunity To Promote Thyself!’”

Therefore, sitting under an arch created from tie-wrapped gardening tools decorated with lush hanging baskets, and flanked by two enormous garden gnomes looking as if they suffered from indigestion, the drummer signalled “OK” to Fritz.

Deep guttural sibilants and sneering power-chords from the lead guitarist cut in, his tongue wriggling and wreathing like an angry rattlesnake, and they sang:

You can be diggin’ holes *snort*

An’ when da day is gone

It ah-ain’t-ah half as sweet

You have been watching

Kifffarces (6): Kiff and the talking carpet from Torino 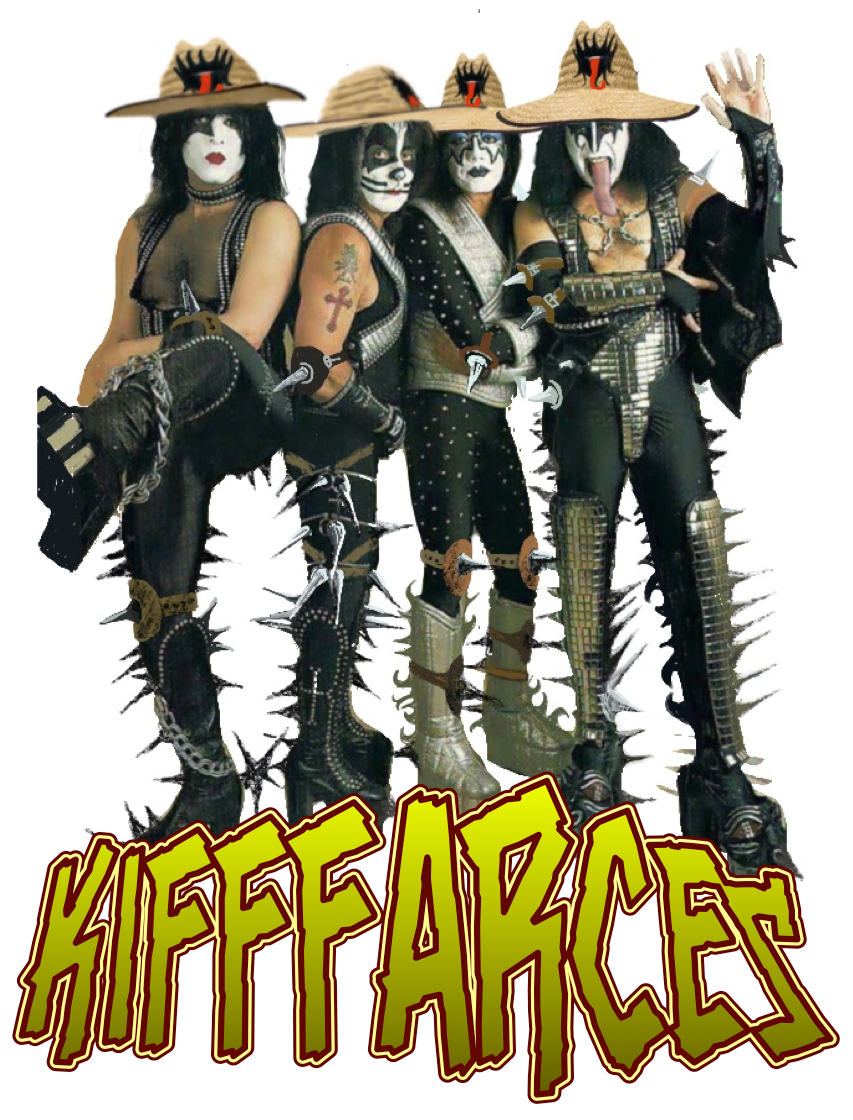