The idea to make this animation arose because two things that happened shortly after one another: the first reading about the British conceptual artist Damien Hirst and his being sponsored by the advertisement agency Saatchi & Saatchi, the second was in a meeting where someone was bragging (wholly irrelevant to the meeting in question) about how enormously important his cousin’s new job at the Tate Gallery was.

All that reminded me of a very silly drawing that I had made back when I was in high school, and I felt it would be just the right thing for poking fun at that kind of inflated nonsense if I would work that goofy drawing out as if it was one of those Conceptual Pieces of Art.

As I said elsewhere on this site, I feel little affinity with the deplorable, compulsively ironic direction in which conceptual visual art has moved. OK, Duchamp was fun in its day, but I’m afraid that visual art has become so stuck in it’s postmodern cul-de-sac that it can’t turn its head to look around any more.

Anyhow, I had lots of fun creating this animation, in which a monstrous contraption is presented as a hipster status symbol: a clock constructed from twelve gas masks all connected to a central filter canister. The hour hand of the clock rotates around the canister and the minute hand circles the gas masks. The passing seconds are indicated by the gas masks’ eye glasses lighting up consecutively, showing the rotating eyes inside. The contraption toots the hours like a cuckoo clock, using a compressed air klaxon. The large metal cylinder suppling the compressed air is, of course, a welcome addition to the pied-a-terre of every self-respecting hipster! Even though gas masks look rather sinister (which is why they’re a mandatory prop in Dr. Who, I suppose) the whole thing is completely silly – as one would expect from art that’s so full of itself that it’s on the verge of suffering a gravitational collapse.

The animation was created in Blender and rendered at RenderStreet.
The sound track is based on a royalty-free piece titled ‘Cellar Door’ from Free Stock Music 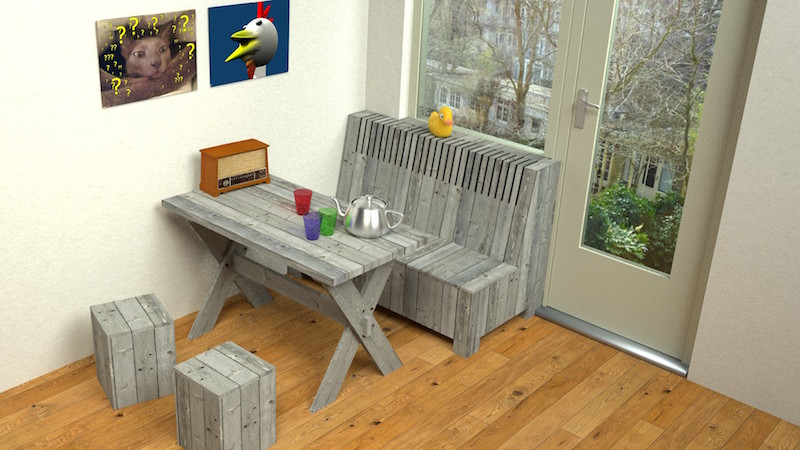